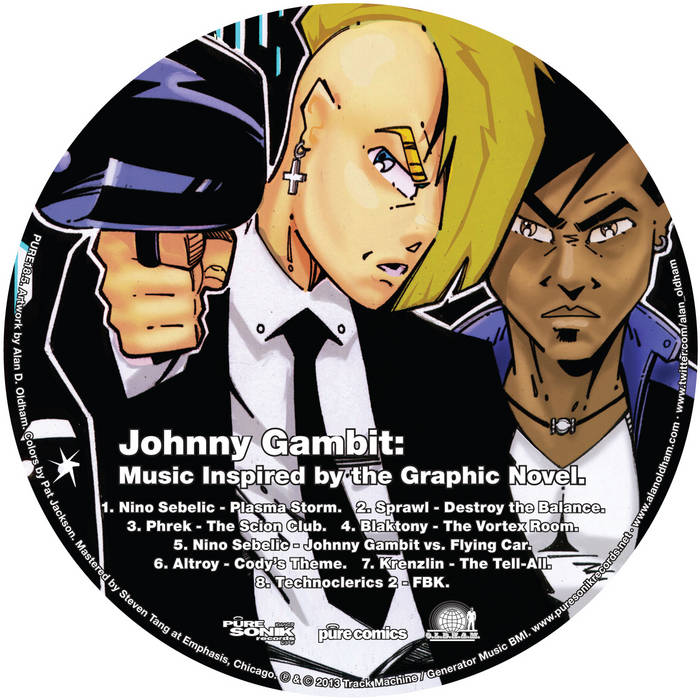 In 2009, Detroit-born polymath Alan D. Oldham released the first new issue of his ongoing graphic novel project, JOHNNY GAMBIT, a new version of the same character whose previous 1980s comic (which Oldham did in his late teens) was featured in copies of his friend Derrick May a.k.a. Rhythim is Rhythim's "Nude Photo" 12-inch.

Along with this new comic, Mr. Oldham issued a techno soundtrack by himself to accompany the project (PURE18).

Flash-forward to 2013 and Oldham is issuing a hardcover, Manga-sized limited edition of the all-new JOHNNY GAMBIT VOLUME ONE graphic novel via his websites www.alanoldham.com, www.puresonikrecords.net, and Bandcamp. For this new project, he has commissioned soundtrack music from both new and veteran artists who have succeeded wildly in capturing the dark, sci-fi mood of Seventh City, the city of the future gone wrong.

West Michigan's Phrek checks in with pitch-perfect Plastikman-esque soundscape/background music with his contribution "The Scion Club."

Ex-Aux 88 MC and grizzled Detroit Techno veteran Blaktony steps out of the shadows to soundtrack the comic book's club sequence with "The Vortex Room."

Nino Sebelic returns with an amazing techno track that mirrors a key action sequence in the comic, "Johnny Gambit vs. Flying Car."

Berlin's Krenzlin is a hot, new talent on the global scene and a Tresor "New Faces" resident. Known primarily for bangin' techno, he dials it back here for a piece of deep house-inspired soundtrack music called "The Tell-All."

Closing out this soundtrack album is a beatless, melodic soundscape from the Midwest's FBK a.k.a. Kevin Kennedy. "Technoclerics 2" captures the mysterious last sequence of the graphic novel, with cryptic hints of things to come!

PURE18.5 was mastered by Steven Tang at Emphasis, Chicago.

"I'm digging this whole concept of Johnny Gambit. Each track stands its own ground and surely finds its place in this Graphic Novel. Respect to Mr. Oldham for bringing the concept of innovative reading to the forefront alongside this music." -- TJ Hicks, Minimalsoul Records

"Just catching up with promos now, really digging both Nino cuts. top busy grooves, will get support from me. thx!" -- Ben Sims

"A very nice compilation/soundtrack for the Johnny Gambit movie...if they ever decide to make one, that is. My favorite tracks include Krenzlin "The Tell-All," the ambient acid that is Phrek "the Scion Club," and FBK's "Technoclerics 2." This entire project would also work nicely as the alternative soundtrack for the movie 'Blade Runner.'" -- Sean Deason

Bandcamp Daily  your guide to the world of Bandcamp

outré black metal, with a Victory Over the Sun interview and music from Liturgy and Jute Gyte.